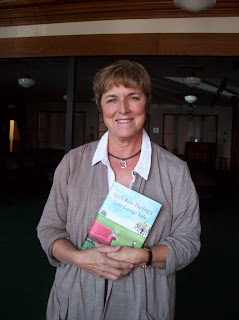 A fifth generation Texan, Lynda has hopped across literary and geographic boundaries in her writing career. She's been a freelance journalist, travel writer, ghostwriter, restaurant and film reviewer, copywriter, college professor, book collaborator, and nonfiction author while living/​writing/​studying in Chicago, San Diego, New Orleans, Madrid, and lots of other heres and theres around the globe.
As a freelance journalist, she's petted baby rhinos, snorkeled with endangered sea turtles, hang-glided off a small Swiss mountain, dodged hurricanes, and interviewed the famous and not-so-famous to write dozens of articles for national and international magazines, newspapers and travel guides, her travel photographs often appearing with her work. She's also crafted collaborative nonfiction with people from all walks of life as well as organizations such as the San Diego Zoo and Wild Animal Park for which she's shown below doing an interview.
Her creative writing, though, has always been the love of her writing life and the stuff of her literary dreams. She holds an MFA from the University of New Orleans and has won awards and residencies from the Illinois Arts Council, Writers League of Texas, Ragdale Foundation, Atlantic Center for the Arts, and Squaw Valley Community of Writers as well as juried attendance to Sewanee Writers Conference among others.
Currently, she is behaving herself in front of her computer screen in the hill country outside Austin, pursuing those pesky literary pretensions as she enjoys her debut novel with Putnam's Amy Einhorn Books.
Her debut novel: On the last day of the millennium, sassy Faith Bass Darling, the richest old lady in Bass, Texas, decides to have a garage sale. With help from a couple of neighborhood boys, Faith lugs her priceless Louis XV elephant clock, countless Tiffany lamps, and everything else from her nineteenth-century mansion out onto her long, sloping lawn.
Why is a recluse of twenty years suddenly selling off her dearest possessions? Becasue God told her to.
As the townspeople grab up five generations of heirlooms, everyone drawn to the sale--including Faith's lon-lost daughter--finds that the antiques not only hold family secrets but also inspire some of life's most imponderable questions:
Do our possessions possess us? What are we without our memories? Is there life after death or second chances here on earth? And is Faith really selling that Tiffany lamp for $1?
Lynda tells us more about the book:
Lynda shares her thoughts about her editor, agents as well as some writing advice: