The Lie: She Said And He Said

Many of us here loved Chad Kultgen's first novel, Average American Male. Now his second novel is out, entitled The Lie. Today, Jackie & Joe present us with their reviews of it.

Jackie says:
I have a sort of morbid fascination with this author after reading his first book The Average American Male. To say his writing style is saying misogynistic is like saying the Grand Canyon is a big hole. It terrified me that when I gave that book to a guy friend of mine he gobbled it up and reviewed it by saying "Ya, that's pretty much how we think". This gave me a full body shudder that I've never been quite able to shake.

Kultgen's second book, The Lie, trumps the first soundly. This is the story of three college kids--2 males, one female. One guy is relatively normal, at least at the beginning of the book. The other guy is an over-privileged fiend that goes out of his way to invent humiliating sexual situations to put women in and has an extensive catalog of offensive descriptions for, and opinions of, women. Completing the triangle is a status conscious, brainless and seemingly soulless young woman. The book tells the tale of how these 3, over the course of their 4 years at college, do their best to destroy each other.

There is some suspense, or at least a hovering sense of impending doom, that kept me turning the pages of this book. It is definitely NOT for the faint of heart or the easily offended. It is sick, twisted, dark and hypnotic. And yes, I will be giving my copy to that same guy friend to see what he thinks. I'm afraid. Very afraid.

Bret Easton Ellis and Chuck Palahniuk fans will easily fall into the Cult of Kultgen.

Joe says:
Chad Kultgen's second novel is quite possibly even more biting than his first. The story of a love triangle gone bad, then worse, then oh-my-god-how-could-it-have-gotten-even-worse-but-it-does. Some of the scenes were not only laugh-out-loud funny, they had me shaking and giggling so much it caused the folks in front of me on the plane I was on to ask what was wrong. And then I let them read it, and they then joined me in laughing as well. (All three of them were women, and I hesitated in letting them read it, as the scene concerned the thoughts of the female character while having sex. I was so relived when they started laughing!) The author doesn't shy away from delving into the horrible inner natures we harbor...and letting his characters live with the nasty debris. This book is not for the feint of heart, nor is it for someone who firmly believes in the trans formative (for the good) power of love. This book is not for any person who finds any derogatory term for women offensive. They all exist here in spades. In the world of this novel, love is a lie and can only bring hell. But if you're looking for a book to describe the inner workings of today's youth, this is the one.


This is a book I could not put down, except when I was laughing too hard, or too gut-punched by the lows each of the three characters managed to take themselves into. I recommended it to a friend of mine, a woman I have known since college, a little unsure what she might think of me as she read the book. She is enjoying the book immensely, saying that she thinks it's hilarious and sadly true.
Posted by hungry reader at 11:55 AM 1 comment: Links to this post 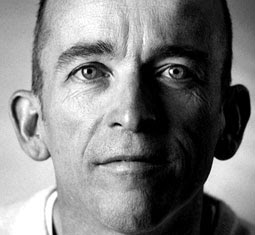 Mark Doty's Fire To Fire: New & Selected Poems won the 2008 National Book Award For Poetry. He is the author of eight books of poetry, as well as the 2007 bestseller, Dog Years.

To quote W.S. Merwin: "A new book of poems - or of anything - by Mark Doty is good news in a dark time. The precision, daring, scope, elegance of his compassion and of the language in which he embodies it are a reassuring pleasure."

To get myself psyched up for this event, I have been re-reading some of my favorite poems by Mark Doty. And it just so happens that one of them I read this morning is on his website. Click here to read "At The Gym".

Please come to the Lower Downtown store tomorrow night for this great chance to listen and meet one of the best poets in America today.

--Joe
Posted by hungry reader at 10:36 AM No comments: Links to this post

Author Joe Hill wants you to Love Your Indie!

We have just learned of a contest sponsored by author Joe Hill, to celebrate this month, which has basically become Love Your Indie Bookstore month.

To learn more about it, click here. Basically, he is urging us all to make at least one purchase during the month of March at an independent bookstore (over $.99) and email him the receipt. He will then, at the end of the month, he will randomly select winners for some fantastic prizes. Check out his website for more rules and prizes.

Thank you, Mr. Hill, for supporting us independents! Want to check out more Joe Hill books? Click here to be taken to the Tattered Cover's website. (Any purchase from our website would qualify you for his contest!)
Posted by hungry reader at 1:58 PM No comments: Links to this post

If you are on Facebook, please become a member of the group Challenge: Keep Independent Bookstores Around the World Thriving.

This group was started by our own Patty Scott Miller (Media Marketing Coordinator) to help raise the visibility of independent bookstores on book- & social-networking sites like Shelfari and Goodreads. By default, the purchase links for books on these sites takes you to amazon, but if individual site users go in and change their links, they can link to sites such as indiebound.org, or their local independent bookstore. (Like the Tattered Cover.) You can even request, via the internet, a book be ready for you to pick up, thus saving you money on shipping and time looking for the book. While you're in your local bookstore, you may find staff recommendations of books you haven't heard of yet, or smell a toasting everything bagel and realize you're hungry, and stop for a coffee, as well, and suddenly, your day just got so much better!

As of this posting, the Facebook group has 686 members. Help us spread the word that where you buy your books really makes a difference. Not just for those working in your local independent bookstore, but for the health of each of those communities.

Thank you!
Posted by hungry reader at 11:01 AM No comments: Links to this post

Sci Fi For Those Who Don't... Part Two 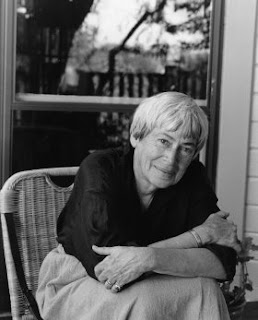 
I recently posted a blog about sci-fi for people who don't read sci-fi in an attempt to get more people to read the genre. I feel that sci-fi gets over-looked a lot as being trash, when really there are some literary gems hiding on those shelfs. This time around I would like to talk about an author I mentioned last time but didn't discuss. Ursula K Le Guin is probably the author I have to push the least. She has been writing for a long time and her work has better exposure than most sci-fi authors. For me, that makes her a good gateway into the world of speculative fiction. What makes Le Guin so good is that she has wonderful character development and is amazing at creating worlds and universes.

With many sci-fi authors the worlds they create are just a back drop to the story they want to tell. For Le Guin they are an integral part of the story, it's what makes her novels so engrossing. She's not creating worlds for the fun of it, but as a way to see our world better.

Le Guin has three novels in what some call the Hainish Cycle that are wonderfully
readable, The Left Hand of Darkness, The Dispossessed, and The Telling.

In 'The Left Hand of Darkness' there is a world of single gender people not so she can explore the idea of mono-gender, but is really a way for her to discuss our own gender issues. In 'The Dispossessed', Le Guin shows us a world of anarchists in conflict with a entirely incorporated society in order to explore our conflicts with corporate culture. 'The Telling' examines the destruction of histories and mythologies in the name of progress and "truth", which means ignoring the deeper truths of these mythologies.

I would recommend all these books to book clubs. They cover so many ideas in a thoughtful way that discussion topics are easy to come by.

If you read Le Guin and like her work, I would recommend Changing Planes. This book is about people being able to move between planes of exsistence, and is basically a compilation of what she does best. A bunch of worlds that tell us something about ourselves, instead of telling us something about them. 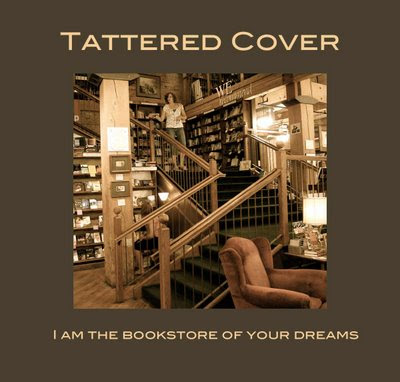 Posted by hungry reader at 10:15 PM 2 comments: Links to this post

We're A One Newspaper Town Now

On Friday, February 27, 2009, Denver's oldest (and the 21st oldest in the U.S.) newspaper, the Rocky Mountain News ("The Rocky") published it's final edition. The writing had been on the wall for a while now, but it still came as a shock to many people when we saw that final newspaper, with its headline of "Goodbye, Colorado."

Saturday morning, Fox 31 News spent a few hours filming a story for that evening's newscast in our Colfax Avenue store. Watch the video to see our lead buyer, Cathy Langer, talking about the paper. And you can even see me (Joe) working the cash register.

Farewell, Rocky...
Posted by hungry reader at 10:11 AM No comments: Links to this post